How dangerous threat is the consumer drone to the plane? We all heard about cases when the birds were the cause of the plane crash, but what about drones? We all know birds can crash a plane, but what about drones? What are the key differences between drone and bird strikes. If a drone get sucked in into engine of a jet it could do a massive damage and destroy that engine. Some airplanes have the ability to fly with only 1 engine.. Let’s find out in all ways how drone can compromise the plane.

So Can a Drone Bring Down a Plane? We all know that birds can bring down a plane, so theoretically the drones can bring down a plane also. If a single drone hits an airplane accidentally, the plane will probably be only slightly damaged and is likely to land safely, but if a drone get sucked in into engine of a jet there is a great possibility of crashing for some planes.

When we talk about consumer drones which are constructed of metal and plastic and these materials have the ability to inflict damage on aircraft unlike the feathers and lightweight bones of bird. So when we think a bit better and ask ourselves will a serious drone strike on an airplane occur, with thousands of drones that are currently in the air, is no longer a matter of if, but when will this happend. While tests on bird strikes have been conducted for decades, what kind of damage a drone would cause was still virtually unknown…until now.  Researchers recently partnered to determine what could happen to a general aviation aircraft if it hit a recreational drone in mid air. 23 near drone misses are reported under almost 6 months in 2018. In one incident drone come within 20 meters over London Palace of Westminster and in other drone was less than 25 meters away during take off and hitting boeing 777.

What Happens When a Drone Hits an plane?

Researchers at the University of Dayton Research institute conducted a lot of tests so that they can determine what could happen to a general aviation aricraft if it hit a recreational drone in midair. So they want to demonstrate what the hazards are or the potential risks are with a drone strike on an aircraft. There’s very little data out there to help people understand what happens, so there has been other types of this type drone testing, but it’s been individual components so they’ve tested batteries, motors, cameras and launched them into panels. But not actual aircraft structures.

This test was to see what would happen if an entire drone struck the leading edge of an airplane wing. The drone that was used for this type of testing is DJI Phantom 2 and that’s a very popular drone out in for hobbyists. It was loaded into the university’s impact physics labs compressed air cannon which would fire it at the wing of a Mooney M20 at a speed of 238 miles/hour. This is the speed that approximates the closing speed between the 2 aircrafts.

The Results:
Drone did not shatter apart, it completely penetrated and it was buried inside the wing. There was a hole in the leading edge, and there was also some tubing inside. There was a substantial amount of damage to the wing. Aircraft would have survived the impact, but for a faster aircraft the results could have been worse. For example; if that was a business jet that was traveling twice as fast as what we tested, there would have been substantially more damage to the spar or could have penetrated a fuel cell, because the energy goes up with a square of the velocity.

How To Prevent Drones From Getting Hit On a Plane?

Today, the terrorist threat is increasing and these things have to be taken seriously. A low cost of Drones today could easily be used for everything from spying and surveillance to actually delivering terror from the sky. Big attention is now turning to proactive defence systems and Anti-drone technology. There is already a big choice on the market in this technology. It is possible to spot the drone targets from a range of 10km to 20km. Fortunately, until now, there have not been any major attacks organized by Drones. But as technology is developing more and more, the question is when a major incident will occur. Anti-Drone Technology or defense system allows neutralization or disabling any kind of Drones in the area. Drones or Unmanned Aerial Vehicles (UAV) systems have been utilized by military forces for years. Therefore anti-drone technology is one of the prevention solutions from drones getting hit on a plane.

Can Drones Fly as High as Planes?

Also the thing you need to keep in mind is that hobby drones aren’t allowed to fly too far from the ground. They are specially designed and limited to a certain height where they can fly. In the United States, drones are permitted to go no higher than 400 feet, unless they have special exemptions from the FAA and in the European Union, flights are limited to 500 feet above the ground. Every drone has it owns software, which is locked and installed on some quadcopters to keep them from flying over restricted areas. 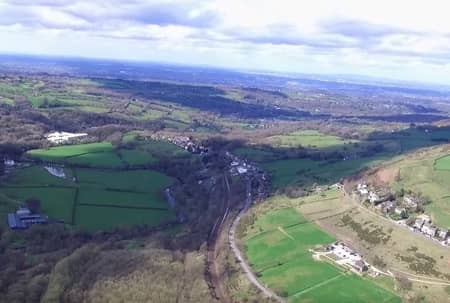 DJI quadcopters have software that limits the maximum altitude to 1,500 feet, above legal limits. But that does not guarantee anything, because if a person understands how the software works, it can easily be bypassed. To get around it, the user can likely change the firmware installed on the quadcopter. The highest height that drone has so far achieved is 11,000 feet, what is way too high for a quadcopter. Also, drone flying time is very limited and most of the drones have average 15-30 minutes flying time. A detailed description about How High Can a Drone Fly you can read on hits article.

Plane Hit by Drone in Britain

Police in Britain has investigate the incident that involved a drone and a passenger plane after a pilot reported that he believed that drones struck his jet before he landed safely at London’s Heathrow Airport. There were no serious consequences but the incident has prompted the British Airline pilot Association to call for more education for drone users and for stronger enforcement of rules to keep aircraft safe. Concern about the fact that the technology is exploding and more people are purchasing them and although regulations are in place both in Canada, United States and around the world. It’s another story when you try to implement those regulations. Risk is if you have these drones that can vary in sizes, the bigger the drone the more risk for damage to the airplane. The biggest risk is for these drones to be ingested by engines and that can do severe damage all the way to having engine completely shut down. Now the airplanes that have 2 engines are made to fly with only one, but certainly we don’t want to test that possibility and we want to keep these drones well away from all airports. Other risks are that is drone hitting some components of the airplanes like control services, but biggest threat is for them to enter the engines.

There were a lot of speculations about this incident and who is behind the Gatwick drone incident in 2018, but to this day the perpetrator was not found. As reported by the media, the police has arrested a man and a woman for criminal use of drone near the airport. In the end they were released. Obviously this incident caused huge disruption and upset to tens of thousands of passengers and their children. Gatwick Airport offered a £50,000 reward for information leading to the arrest of the perpetrators, and the police recovered a damaged drone on the airport’s boundary.

What are the Regulations and Laws?

You need to remember that it is your responsibility to be aware and that you follow the rules when you are flying a drone. Always check the rules. In the past few years and even the past few months the rules and regulations regarding drone use in the USA and in the Europe have changed a lot. Countless misleading news articles, news headlines and forum posts avoided lots of users putting bad information. Rules differ from country to country. In all countries, 3 main types of rules will apply to your drone activity (privacy and data protection, safety and operation and insurance and liability). Cities and large portions of the airpasce above are forbidden for drones. Also it is forbidden to fly near airports or people and always keep drone in sight in order to avoid obstacles and accidents. It is also against the law to fly a drone higher than 120 meters in restricted airspace. This is one of the ways by which is trying to reduce the chance of bringing down a plane by drone.

For now we have seen that there was a lot near-misses of drones on the aircrafts and this trend will increase even more and that’s the reason why pilots are even more concerend. We are aware of risks by drones that can vary in sizes, the bigger the drone the more risk for damage to the airplane. The biggest risk is for these drones to be ingested by engines and that can do severe damage all the way to having engine completely shut down. In this article we have also seen a couple of drone incidents that have occurred in the past and this trend will increase in the future as well. One of the solutions that is currently being used to proactive airplanes is defence systems and Anti-drone technology.  No matter what it is forbidden to fly near airports, people do it anyway. Therefore we are still looking for alternative solutions. If you have any questions or would like to say your opinion, feel free to comment below.